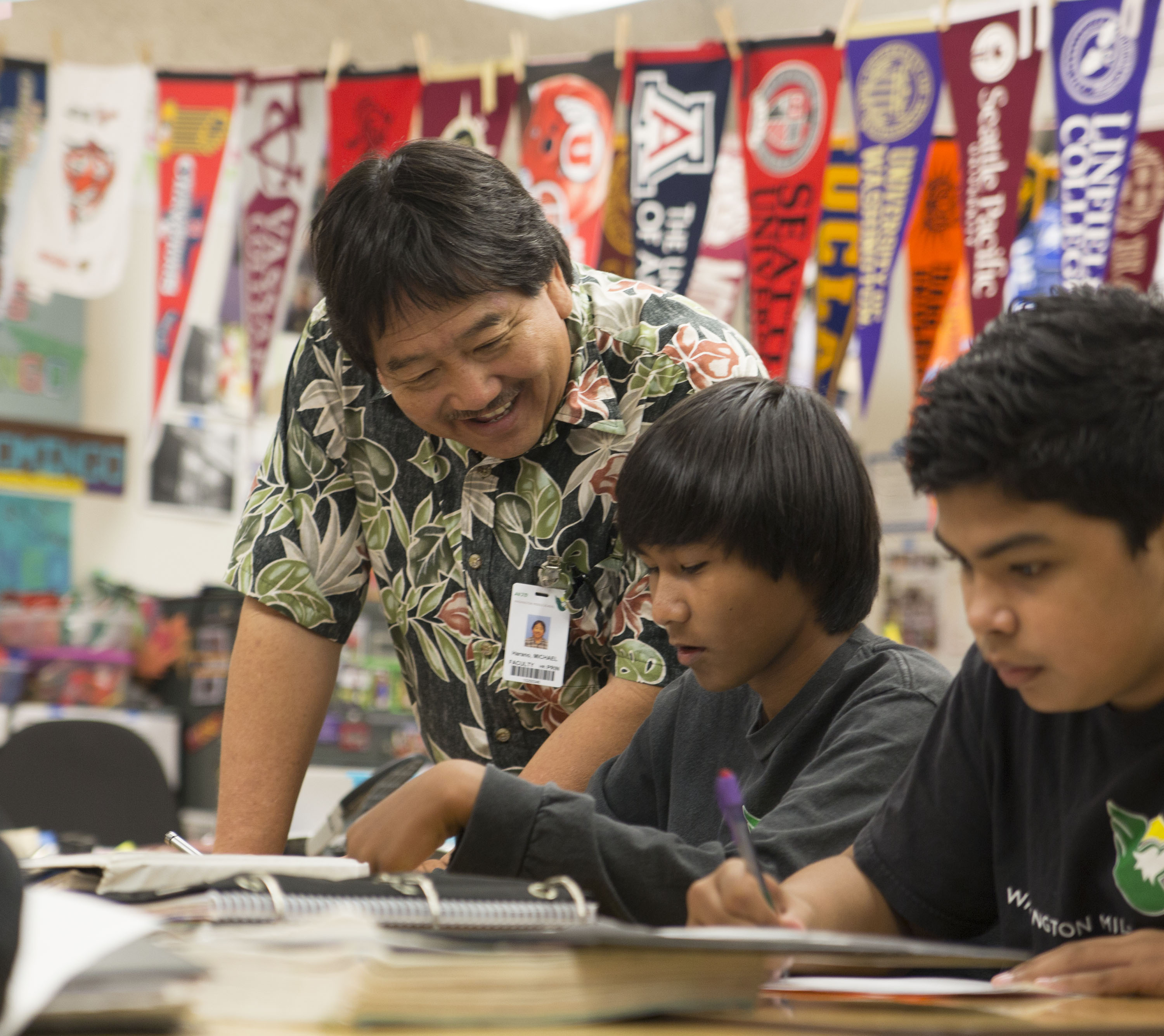 Hawaii government employees have passion for their careers and many fascinating stories. Our members are also shy and reluctant to talk about themselves. But with some convincing and much credit to his faculty and staff, Washington Middle School Principal Michael Harano agreed to share some of the vision, goals and successes of his school.

Harano, a Unit 6 member, is clearly a middle school advocate. He believes that the middle school student’s brain is where great inspiration for future endeavors can be started. Through the guidance of his dedicated teachers, staff and programs, Harano wants students to be motivated, whether it’s academics or extracurricular activities. “We need to expose them to different things to light the passion,” he said. “Here at Washington Middle School we have extensive afterschool programs, our own clubs, and athletic teams. Higher level, abstract thinking kicks in during the middle school years; this should be a place that ignites their passion.”

One of those afterschool activities incorporates academics – the Math Team. The Washington Middle School Math Team has a reputation around town for excellence in competing with top students from public and private schools across the state. It was 2007 when Washington Middle School’s students first out calculated their peers and won the state’s top MathCounts competition, giving them the realization that they could do it. Before it happened, Harano remembers overhearing students’ comments. “I heard the kids say, ‘first place will be Punahou and second place is Iolani,’ and I really challenged them and let them know that the eventual winner will be the team that works the hardest. In 2007 when we broke through, they were like, ‘oh, I guess we are smart.’” 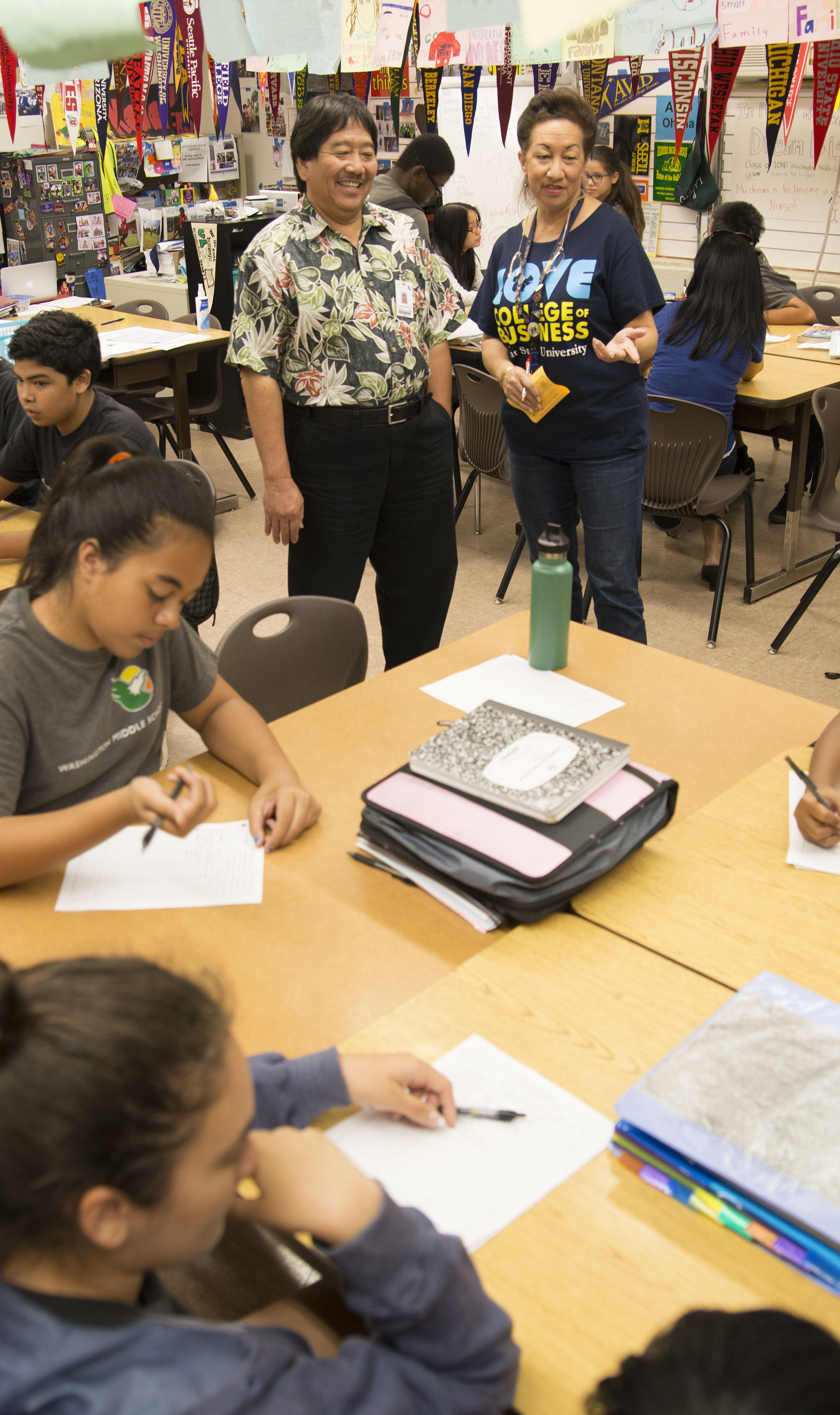 The Math Team isn’t the only bright spot for the middle school located in the densely populated urban Honolulu area between South King and Punahou Streets where 800 kids show up each school day. Washington Middle School has created a can-do atmosphere to encourage all of their students to think about attending college. To get students motivated, they have a program called Advancement Via Individual Determination, or AVID, which promotes college preparedness to middle school students. Washington Middle was the first Hawaii middle school and one of only 2 percent of AVID schools nationwide to be named an AVID National Demonstration School, the highest level of AVID implementation in the AVID World.

As a way to promote the college going culture, faculty and students have had designated “Wear a College Shirt” day where everyone is encouraged to wear a college shirt of their choice. Also, the campus and some classrooms are decorated with college paraphernalia and posters of the College Search Project assigned to all AVID students. Not all of the students have a college shirt, and donations are always welcome.

“Our former student would never have thought about wrestling in high school except that here at Washington, she wrestled for two years and found that she liked it,” Harano said. “Now she is in high school and recently won first place in the OIA in her weight class. She is an example of someone who found her passion in our afterschool program and now she knows there are college scholarships for female wrestlers and even possibly the Olympics.”

Harano started out teaching part-time at Aiea High School. He also coached baseball, softball and basketball at various schools. His first full-time teaching job was as an alternative education teacher at the Wahiawa Storefront School. He later taught special education at Waianae High School and Kalani High School, was an administrative intern at Dole Middle School for one year, vice principal at Washington Middle School for four years and principal at Kailua Elementary School for four years.

Harano certainly loves the middle school level. He has been at Washington Middle School for 18 years, 14 as principal and four as vice principal. It is a place where he is making a positive impact and guiding many young minds.

Harano believes that his students will go on to do great things in the world, and he urges them to remember their middle school as the place where it all began.