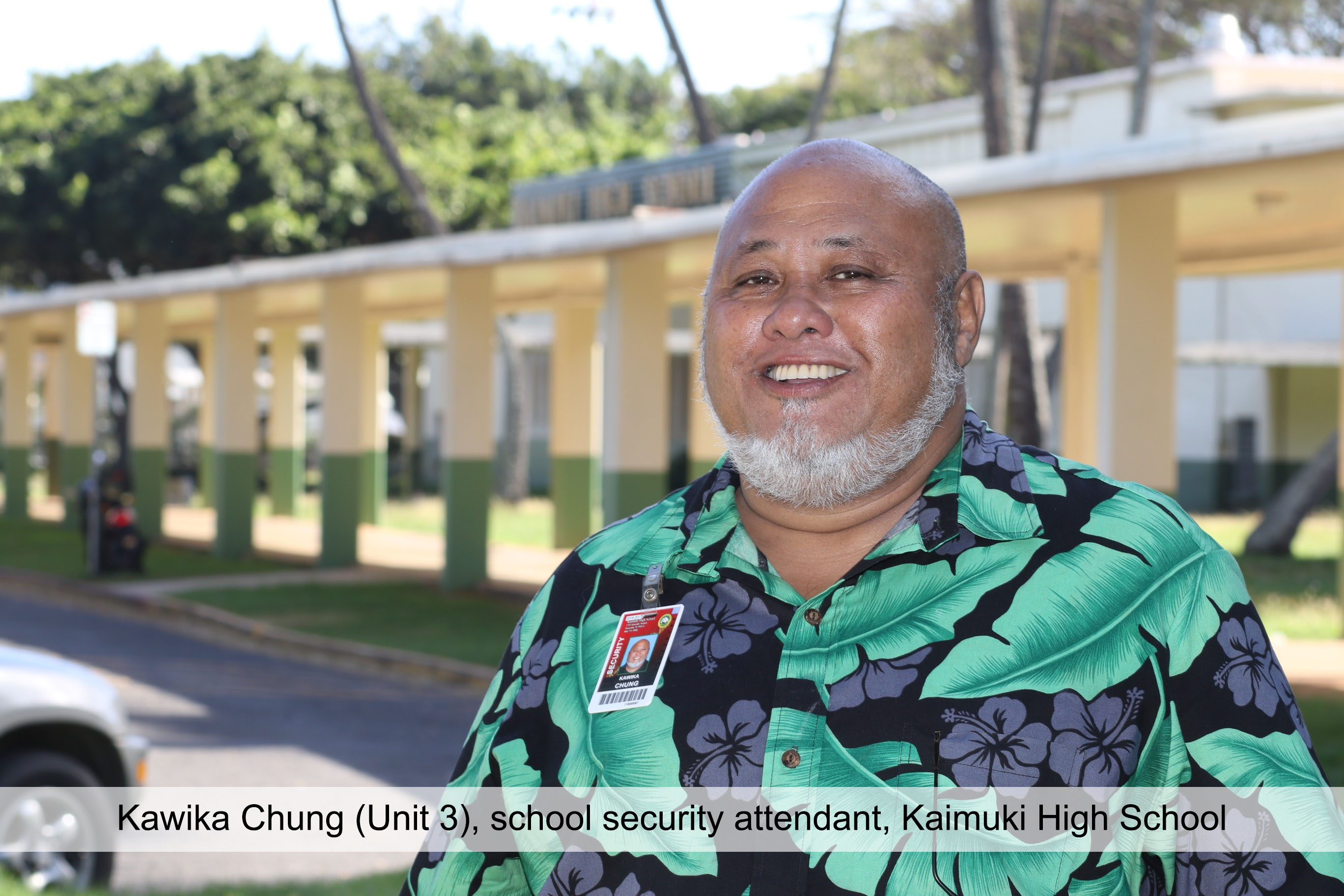 If it wasn’t for a defibrillator on campus and the quick acting staff and faculty at Kaimuki High School, School Security Attendant and Unit 3 member Kawika Chung says he wouldn’t be here doing the job he loves — patrolling the campus and working with students.

Chung said his life-changing day began when he walked into Vice Principal and Unit 6 member Kevin Yuen’s office for a meeting one day and felt dizzy. “I tried to reach for a chair, but it was too late. I was down,” Chung recalls. “At first Mr. Yuen thought I was joking around.”

But it was no joke. CPR was started on Chung, but it wasn’t working and time was passing. “Good thing we had a defibrillator in the school office — the two guys, fellow School Security Attendants Solomon Soares and Edward Wells, saved my life.”

After he was revived and headed to the hospital, Chung learned that he had suffered a massive heart attack. Now, he has both a pacemaker and a defibrillator implanted in his chest — keeping him alive. “I was out eight to 10 minutes. The doctor said there was only a two percent chance that I would survive without any bad effects — but I did,” says Chung. He’s now grateful to be alive. “It changed my life,” explains Chung. “I used to get mad over simple stuff, not anymore.”

Being mindful that he must take care of his health, Chung tries to manage his stress and lifestyle. He said he enjoys his challenging job as a security attendant, but because the salary is too low, he works at private security jobs at night and on weekends to supplement his income.

Despite some misleading news reports by Grassroots Institute of Hawaii critics who claim government employees are overpaid, most of our state and county workers make very modest salaries while providing important and necessary work and services to residents and visitors.

With both union and non-union positions, Chung sees the difference in employment. He values having a contract and a union to represent him and negotiate on his behalf.

“I value our union,” he says. “I need to minimize my stress where I can, and belonging to HGEA gives me peace of mind. When I was having problems with payroll, I called my agent to get that problem addressed and she got it resolved. Without a union, it’s just you taking it up with your boss — and you can guess how that’s going to end up. My job is to help protect the students and my co-workers, and HGEA works to protect me.”

With his second chance at life, Chung looks forward to continue working at Kaimuki High School for many years to come.